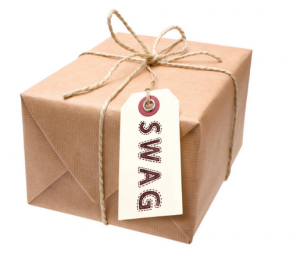 About 6 years ago I was reading an article by Marc Echo about how he sends out “Swag Bombs.” It was a very interesting term and I wanted to learn more. He was talking about sending out unique gifts to clients, friends or anyone whose attention he was trying to get.  He would send them a gift that was personal, sometimes valuable, and always thoughtful.

The main purpose of sending out these Swag Bombs is to help open up a point of contact. You can really grab someone’s attention and turn them into a contact, client, friend, or even business partner.  Maybe the recipient of this thoughtful gift could be a local business contact that you have been trying to get in front of, or an industry mogul that you thought to be untouchable or unapproachable.

My business partner Chris and I were in a Mastermind group hosted by Russell Brunson and he does something similar which he calls a “Dream 100” list. A “Dream 100” is your personal list of 100 people you want to do business with, be in touch with, or just know. The idea behind it is to write down these top 100 people and in essence “Swag Bomb” them in order to get in front of them. Possible reasons to send them a Swag Bomb would be to put your name on their radar, show them your product, invite them onto your podcast, do business with them, or anything else that would benefit you from having a direct connection with them.

100 people sounds like a lot, but go ahead and put them all on your list and over time, chip away at the list by sending out swag bombs as easy introductions or openings and try to get in front of them to help you in business or in life. You never know what that could lead to in the future.

Before we were a part of this Mastermind we were actually “Swag Bombed” by Russell. One day I opened my mail and received a tablet preloaded with a direct message from him along with some videos about his Mastermind group.  It probably cost him around $100 but his Mastermind costs $25,000, so if he could convert some of those tablets into clients, it ended up paying for itself over and over.  Although it doesn’t have to be extremely expensive, it does have to be creative and not just a dumb tchotchke—no one wants that crap.

Chris and I sent a Swag Bomb out to one of the guys from a popular HGTV show and surprisingly he directly reached out to me. I didn’t even have to call him, he called me directly. His first words were, “Thank you for the thoughtful gift,” and then asked why we contacted him.  I told him we don’t have anything in mind, but we are on a similar business path, and maybe there will be an opportunity to work together in the future, and maybe not, but at least we now have each other’s contact information.

A great example of one Swag Bomb we did was Uber-ing high end wine to a local business contact who we wanted to get in touch with, but didn’t know how.  So we went on the Uber app, had them pick up the wine at our office—it was funny trying to convince and explain this to the Uber drive—and had the wine sent directly to him. Sure enough, one hour later he called me directly to thank me.

We’ve sent wine, books, sports jerseys… Anything thoughtful related to its purpose works. Something simple we send regularly are Hard Money Bankers t-shirts along with some other goodies which results in really nice feedback.

Most recently, for the launch of our newly published book, “The Whiteboard,” Chris and I created custom videos for people like Cal Ripkin, Warren Buffett, and other people most might consider untouchable.  We uploaded the videos onto YouTube, created vanity links, and then put labels with the links on the books, and shipped the books to each of them.  It was creative and a great way to grab their attention and introduce ourselves.  We try to create a theme with a direct purpose when we send Swag Bombs.  It could be big or small, but it has to make an impact on the recipient. Don’t worry about how much the gift costs since it’s more important to be perceived as valuable in the recipient’s eyes.

We are fully aware that the majority of our Swag Bombs will never get responded to or just fall by the wayside but who knows—maybe one day Warren Buffett will really call me or pick up his phone if I call him to follow up to make sure he got our gift.

Remember, be as creative as you can and have fun with it.  Just make sure you are “Swag Bombin’”.