Property Tax Increases Coming to a City Near You 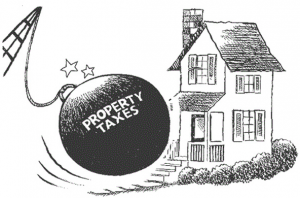 Every Sunday I have a ritual. After my kids have breakfast and my wife has her coffee, I sneak back to our bedroom for some quiet time with the Wall Street Journal. This past Sunday I stumbled across an opinion piece on 19th century political economist Henry George (read the article here).

Henry George gained fame in the late 1800’s with his book Progress and Poverty. His most famous, and surviving, economic policy was the idea that the only tax governments should collect is a land tax.

I am a fan of fewer taxes and less complex tax assessment, but as a Real Estate investor, I’m not sure I’m a fan of this proposal.

Right now, governments across the country are struggling. From the local and state level all the way to the national government in Washington, revenues are not keeping pace with expenses. The problem has triggered heated debate on the Sunday shows and talk radio. It has also led local politicians in the hunt to find new revenue. A common hunting ground has been property taxes.

In January and February of this year I received several letters from the City of Philadelphia. I have a handful of rental properties there, and the city wrote to inform me that their new Actual Value Initiative would be taking effect in 2014.

Under the new initiative the tax rate will be reduced. How nice. The catch is that property values are being re-assessed. The result is a higher property tax.

It’s been nearly impossible to determine how the city arrived at their property values. My phone calls have been met with double speak and marble-mouthed jargon from City Hall. But the research I did seemed to show an unfair application of the law.

In some neighborhoods, property tax rates have double or even tripled. In others, the increases are simply passed to Real Estate investors through a Homestead Exemption which applies only to owner occupants.

It’s the way of the world, I guess. Times change. Taxes go up. Life moves on. My real concern is the impact that similar legislation will surely have on urban areas across the country.

Pockets of properties in some metropolitan markets are owned by investors and occupied by tenants. These areas are attractive investments because of the low entry costs and relatively low overhead of taxes and insurance. Properties in such areas are great cash flow investments. They also play an important role in their communities.

As we learned from the mortgage debacle of the early 21st century, not everyone is qualified to own a home. That’s not a judgment on my part. It’s a fact. But these people need a place to live.

When governments increase property taxes it affects cash flow. Without cash flow there is no incentive for Real Estate investors to get into these traditionally attractive rental markets. Investors leave and neighborhoods decay.

What local political officials seem to overlook is the unintended consequences of their legislation.

Henry George was a smart man. He knew a lot more about Economics than I certainly do. But from where I sit, an increase in property and land taxes is not good for communities or for the country.

New taxes are coming to a city near you. Remember to consider these additional costs when evaluating your next investment opportunity. Make sure your local politicians consider you before moving forward with their newest revenue stream.